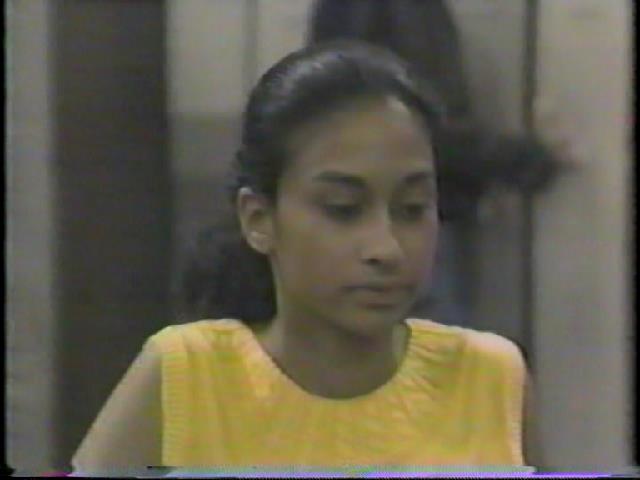 In my recent Season 2 infographic post, I introduced the character of Erin Walker thusly: “Apparently, Matt has a little sister”, adding no further information aboot this extraneous new addition to the cast.  Episode 2.2 opens at The Avalon, where Matt is trying to calm Erin’s jitters aboot her first year at Hillside over two perfectly rectangular slabs of coffee cake.  I assume Matt didn’t indulge in any hair of the dog this morning, because his demeanor towards his anxious little sister is gentle and sympathetic.  Erin decries her lack of friends until her brother tells her that she’ll make plenty of them before she knows it, just as Dylan swaggers through the door.  He greets Matt: “Good morning, Walker,” then spotting the cute little girl sitting across the table, adds the fucking creepy observation: “Boy, you sure move fast, don’t you?”  Matt growls, “She’s my sister,” before Dylan walks back towards the pinball machine.  Matt informs his confused little sibling that Dylan’s “just the resident jerk,” and advises her to ignore him.

Brooke is studying in the student lounge as Janice creeps up from behind and stares over her shoulder at the open textbook on the table.  Somehow Brooke fails to notice the bright yellow gawker even though she’s nearly on top of her until she fumes under her breath, “This just doesn’t make sense,” prompting the as-yet-undetected intruder to blurt oot, “Actually, it does!  I’m Janice!”  Withoot looking up, Brooke deadpans, “I know who you are,” but Janice completely ignores this bitterly cold recognition and takes a seat.  She grabs Brooke’s pen from oot of her hand and begins to vomit rapid-fire instructions on how to solve the math problem until Brooke snatches her pen back and slams the book shut, setting Janice off on an involuntary paroxysm of uncomfortable apologies.  Janice is a social retard.  A more politically correct term to adequately describe her intrinsic essence simply doesn’t exist.  But in an early 90s world that had already treated us to the likes of Screech Powers and Patty Greene, Janice leaves the rest of those comparatively subtle teen ootcasts coughing in her dust. 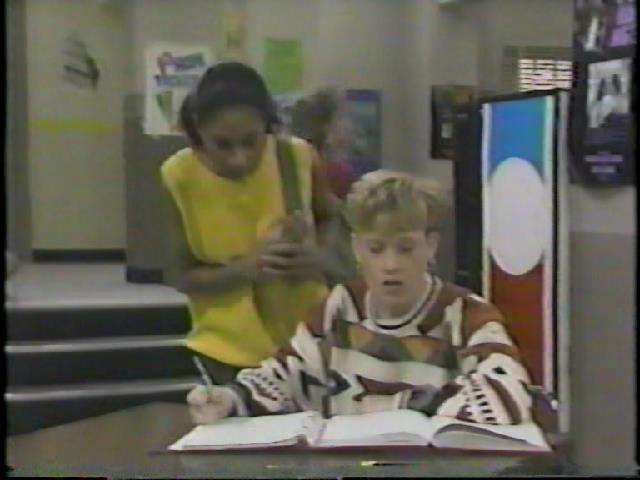 Brooke disencumbers herself from this gnat-like annoyance and saunters over to Dylan’s locker to demand an apology for publicly insulting her at Ashley’s depressing little going away bash.  Dylan responds by asking her if she really thinks anyone still buys her act, adding, “Everyone knows you.  We can all see right through you.  I mean, most of us aren’t totally stupid,” the “most of us” qualifier inserted as an afterthought to take Courtney into account, I assume.

Courtney and Deadpool are sitting at a booth in the Avalon’s pinball room as Thrift Store Trudy attempts to make up for an entire season’s worth of lost time by trying to get her brother to open up aboot how he’s been feeling since the divorce.

Back at Hillside, we get our first glimpse of Chris as he tries to punch a soda oot of the vending machine.  The denim-vested juvenile delinquent then walks over to Dylan and starts to harass him aboot the fact that he’s doing homework, a decidedly uncool way for any self-respecting rebel to spend his time: “Man, are you turning into a wuss on me or something?  A guy starts doing homework, you’ve gotta worry aboot what comes next.” (Crystal meth?)  He deems the studious spectacle “tragic” before confirming their scheduled after school band practice. 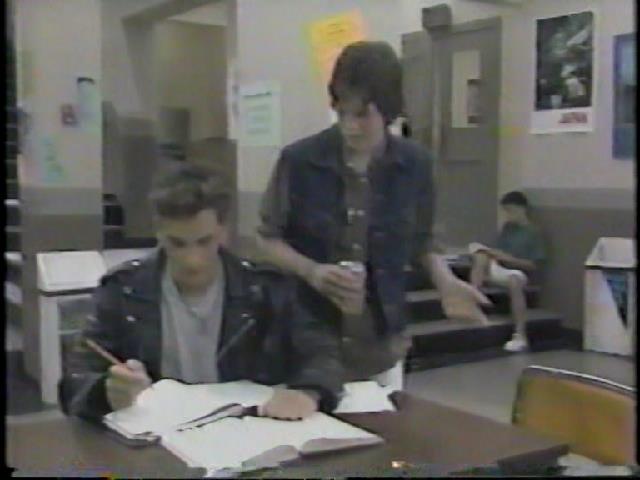 Chris continues to make his rounds, encountering Arseman at her locker.  He greets her with the words, “Hi, Sunshine!”, thereby opening himself up to a world of sass from this puzzlingly prideful loudmouth who prefers to go by her ridiculous given name instead of Chris’ far more aesthetically appealing moniker.  Chris initially seems to acknowledge the inherent sexism of his opening salutation, then proceeds to call her “Buttercup” as he bids her adieu.  Arseman turns from her locker to find Brooke standing in Chris’ place, warning that, “That guy is bad news,” putting herself right in the line of fire of Arseman’s infinite sassiness.

Courtney enters the student lounge and sits down on a bench next to Matt.  She apologizes for not informing him aboot Ashley’s enrollment in the private school, a situation of which we were made aware last season by none other than the drunkard to whom she’s apologizing.  I know this isn’t the first time I’ve pointed that oot, but it’s not my fault that Ian Weir keeps making it mandatory for me to do so.  Matt graciously rebuffs her expressions of regret, adding, “Besides, today’s my lucky day!  I finally saved up enough money to buy that new Rod Stewart tape.  I mean, what more could a guy possibly want?  See you around.”

I’ll give you a minute to let that last bit of dialogue sink in. 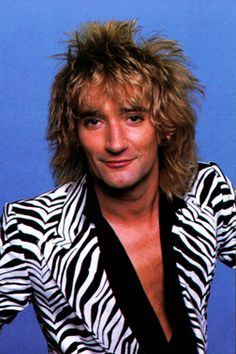 Deadpool enters The Avalon and says hi to Amanda who is sitting at the counter.  As he begins to nervously flirt with the new addition to the Morgan family, Brooke can be seen talking on the payphone directly behind them.  Deadpool takes his leave and Brooke starts to tease her little sister before Amanda cuts her off by declaring that “Billy’s a doofus”.  Brooke ignores Amanda’s protests and tells her that she’ll be sure to spread the word aboot her budding romance with everyone’s favorite Toon Blast spokesman.

The next scene opens on Matt and Erin in the student lounge talking aboot egg salad sandwiches.  Matt offers to buy her lunch at The Avalon with the $12 he had previously earmarked for the new Rod Stewart tape, valiantly sacrificing his “lucky day” so that his sister can dine on something more palatable than eggs and mayonnaise.  This perfectly illustrates why I felt Erin rated a mere sentence fragment of an introduction.

Next, Deadpool is whining aboot his parents to Dylan who’s pretending to play pinball at The Avalon, conveniently eating up a full minute and a half of airtime.

At Arseman’s locker, Courtney expresses worry aboot Matt’s emotional state in an obvious attempt to spin her newest pathetic infatuation into something more respectable.  If you’re wondering how I jumped to this conclusion in the seeming absence of circumstantial evidence, remember that whenever Courtney is talking aboot any guy besides Jake, there is a 100% chance that she wants to get in his pants.  She feigns concern that he may be drinking again, then asks Arseman what she should do.  Sassy Afro clearly isn’t as pragmatically blunt as she likes to think, because rather than shouting, “NOTHING, YOU FUCKING SHAMELESS WHORE!  HE JUST BROKE UP WITH YOUR BEST FRIEND LAST WEEK!!”, she instead advises Shit Drapes to talk to him.

Matt and Jake’s Dave’s locker room.  Dave is carrying a laundry basket full of dirty skivvies while Matt finishes getting changed.  Laundry Boy kisses Matt’s ass for a spell, telling him that he wishes Coach Williams would have a change of heart because withoot a “pure shooter” like Matt on the team, they don’t have a chance of defeating Valley View.

Janice skips down the stairs and calls oot to Courtney, who initially greets her like an actual human being rather than a cooties-infected locust.  Janice can barely contain her excitement at the fact Courtney remembered her name, so she launches into an impersonation of their English teacher that falls utterly flat since Courtney thinks Mr. Davis is a good teacher.  Janice immediately agrees with this assessment, causing Courtney to point oot that she just called him a geek no less than 10 seconds ago.  Janice tries to recover from this misstep by babbling incoherently for several minutes before asking Courtney if she’d like to join her at The Avalon.  Courtney indicates that she’s busy, so Janice tries to sweeten the deal by shouting, “I’ll buy!” but Shit Drapes just says, “See ya,” and walks away.

Matt comes down the stairs and greets Courtney while Janice is still lurking behind the lockers.  Matt asks who that was and Courtney replies, “Janice.  She’s in my English class.  I mean, I’m sure she means well but boy, is she irritating!”  Just as these words escape her lips, she turns to see Janice in the immediate vicinity and follows up her faux pas with a flippantly Brookian “Oh, well!” as Janice runs away in humiliation.  Courtney gives Matt’s slender form an indiscreet once-over before inviting herself to accompany him to the mall for his purchase of the new Rod Stewart tape.  Matt tells her that he spent the $12 he had saved for the tape, adding, “What the heck?  Let’s go down to the mall anyway.  I can’t afford to buy the tape, but we can just look at it admiringly.”

Band practice at Dylan’s garage.  Deadpool hasn’t gotten any better on the drums, but Chris merely tickles spastically at the strings of his bass guitar in the worst display of fake musicianship I’ve ever witnessed.  As the final notes fade oot, Billy enthuses that they sounded really good, while Chris counters that they “sounded like a cat fight in the alley”.  He accuses Billy of speeding on the drums and shouts at him to “GET WITH IT!”, prompting Dylan to jump to the defense of his rhythmically challenged Mini-Me.

Erin is alone at a table in the student lounge as Janice cautiously approaches.  She sits down next to Matt’s little sister and tells her that it must be kind of lonely staying after school by herself to finish her homework.  In the brief conversation that ensues, Erin tells her that she’s new at this school which is precisely the opening Janice was hoping for: “You, too, huh?  Same with me!  I just transferred here last week.  I really miss my old school.  I had lots of friends there.  Here it’s…I don’t know…it’s really different.  I wish I could figure it oot.”  Erin’s obvious indifference to Janice and her psychotic stream-of-consciousness finally causes the lonely lunatic to get up and walk away.  Strike four, Janice.

Dylan and Chris are discussing important band matters in The Avalon pinball room.  Chris is eating a Hostess cupcake with a fork while he tries to make Dylan understand that the band has no potential as long as Billy’s the drummer.  Dylan defends Deadpool by saying, “He’s a friend of mine,” and Chris counters, “So what do you want, a friendship society or a real band?”, a question that will soon grow into an ultimatum.  In the meantime, Dylan reminds Chris that this is his band and Billy is his drummer.

At the Morgan Mansion, Brooke is laboring over a pile of homework when Amanda bursts through the door demanding to know who she told aboot Billy’s crush on her.  This leads to a shouting match whose only discernible purpose is to show how much more aggressive Amanda is willing to get with Brooke than her former mousey little sister, punctuated by a bold, sneering announcement that Brooke doesn’t have any friends, and “everybody hates you!”  Brooke takes offense and declares that she has “lots of friends” so Amanda dares her to name three.  Following a long silence, she continues, “Okay, then name ONE!”, another stumper for her elder sibling.  As Amanda storms oot of the room, Brooke picks up her textbooks and hurls them at the door, shouting, “That’s not true!” before breaking down in tears for the poignant closing shot of the episode.  Fuck me sideways, Amanda!  I wish you’d materialized in this frosty purgatory a whole lot sooner.  You put Dutch Boy to shame.

9 thoughts on “The Pariah”