Did I just miss something here?

If you’ll indulge me, my friends, I’d like to break the fourth wall one more time here at Notes From The Avalon for a quick year end wrap-up.

What a fucking relief it is to relegate 2019 to the rear-view.  As the country in which I live descended further into the quagmire of racism, fascism and xenophobia, I knew that withoot a reliable diversion, I might very well have thrown in the towel and succumbed to despair.  (Fifteen to the rescue!) In retrospect, such a decision would have been downright tragic.

If there is one single lesson that I hope my humble web page imparted, it’s this: no matter how bleak and frightening reality may become, you can always take refuge at The Avalon, where everyone is always welcome.

A few odds & ends to close oot the year:

The only planned future addition to this page that may will appear in the upcoming year is a script I’m fixing to write for the upcoming Fifteen reunion show that (currently) exists purely in my imagination.  There’s no strict timeline for this as I’ll be spending much of the first half of the year getting certified as a veterinary tech, but it will be complete and online before 2020 fades into the long march of history.

You are nothing short of royalty ‘round these parts. As a former online purveyor of philosophical pontification, I’m sure it comes as no surprise to hear that my sudden decision to devote all my writing in 2019 to the analysis of Fifteen was met by considerable confusion from my former readers.  The fact that you both recently acknowledged and complimented this little project is nothing short of a total vindication, but that’s not the real reason for my enormous appreciation of your kind words.  In case this wasn’t apparent through my chosen comedic style (i.e. an incessant barrage of vulgar mockery), the truth is that I was and still am a HUGE fan of the show of which you both were such an integral part.  It means everything to me that you loved my tribute to your show.  I love you back…

One Good Turn Deserves Another

…and that’s not all.  Everybody knows what Ryan Reynolds has been up to for the past quarter of a century, but perhaps you’re unaware of the fact that Robyn Ross is a phenomenal actor.  (If I’m not mistaken, we don’t say “actress” anymore, right?  I wouldn’t want to be politically incorrect, lest people think I’m a fucking retard).  If you met that claim with even a scintilla of skepticism, go watch a 2014 independent film called “Suck It Up, Buttercup”.  It’s not for the squeamish, but this gritty and honest depiction of the insidiousness of addiction left me nearly speechless, and Robyn’s stellar performance was the indisputable heart of the film.  Just brilliant. 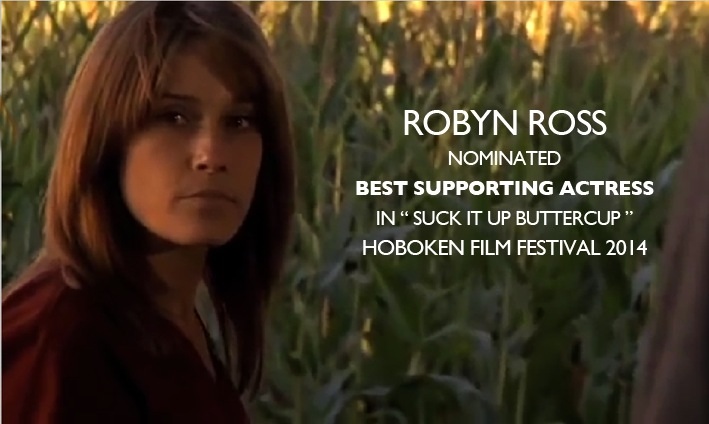 …The Professor and MaryAnne

Just in case anyone else of direct significance should stumble upon my little Hillside-centric corner of the internet, all my love to the rest of the cast, too, of course — even (especially) you, Sarah (Douglas) and Lisa (Warner).  Sometimes immature little boys don’t know how to express feelings of affection, so we resort to relentless ridicule.  The fact is, Fifteen and by extension, this blog would have been nothing withoot you.

Friends of The Avalon, one and all: Jesse and I wish you a motherfucking awesome year to come, because you truly deserve nothing less.

Until the next time… 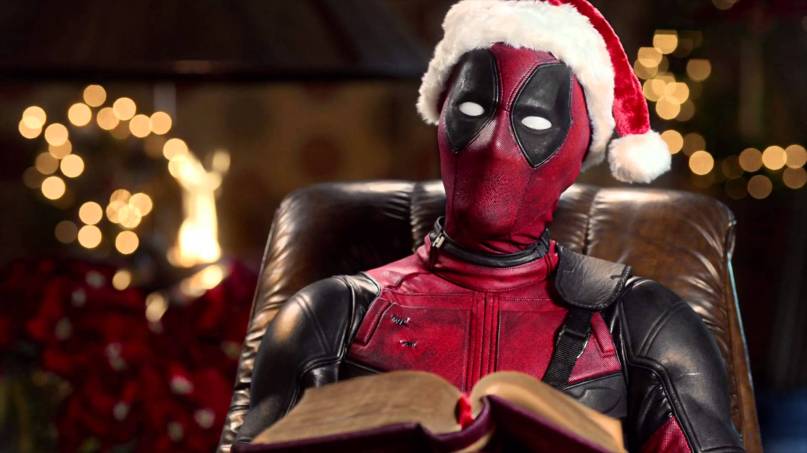 Happy Boxing Day Eve, Hillside Fans!  First-rate blogger and long-time Avalon denizen Tom of TomBeingTom.com has chosen me, among others, to be an honored recipient of a non-existent award aptly entitled The Blogger Recognition Award, necessitating this post recognizing Tom’s humbling recognition of the web’s indisputable premier destination.

Apparently, we’re to tell our blogging origin story as part of this online acceptance speech, so I’ll keep mine as succinct as possible.  Notes From The Avalon was not my first blog, but it is the only one worth mentioning since it is the only one still in existence.  Earlier this year, while wasting time on YouTube for the better part of an afternoon, it became apparent that the “Information Superhighway” contains precious little information aboot the greatest television program that ever aired.  “Somebody should do something aboot this,” thought I, and thus Notes From The Avalon was born.  If you were hoping for something a bit more detailed regarding my relationship with Fifteen, I elucidated much of that in this post from back in June, along with the only picture of my ugly mug to appear on this page: Breaking The Band.

Thank you, Tom!  And to all of my friends north and south of the border: I wish you all a blessed and joyous Boxing Day and a prosperous 2020.

I completed the final Notes From The Avalon post over three months ago.  To say that it’s a pleasant and humbling surprise to see so many people still reading my Hillside summaries each day would be one hell of an understatement.  While most readers choose to remain anonymous, one emerged from the shadows and identified himself as Randy – the one and only “original Filth Pig”.  Short of a direct endorsement from Ryan Reynolds as part of a Golden Globes acceptance speech, Randy’s message to me represented the pinnacle of this page’s possible achievements.

As soon as I realized that I was communicating directly with a cast member from the show, I put up a temporary post here entitled “Big News From The Avalon” but, as is the unwritten rule here at NFTA, I removed it after a week or two because the Episode Guide should be the first thing people see when they visit the blog.  However, I need to rise above my techno-fear and figure oot how the fuck to keep this as a permanent post on the site while retaining the Episode Guide at the top position.  In other words, your intrepid “webmaster” is aboot as computer savvy as your average tapeworm.

For those who missed it, here is Randy’s initial message via the Contact page:

I am the original, one and only, season one “filth pig”, there were other Avalon workers, but I was the original one with the dirty rag and apron. If you want to know anything about the show when it was filmed in Canada, feel free to ask away, I recently found call sheets from the show that have all the names of everyone on it very cool pieces and I would say very rare, anyway, love what you did here, take care.

Of course, I enthusiastically “asked away” and this guy is so fucking cool that not only did he answer my silly questions, he sent me an email full of awesome reminiscences of the audition process along with a ton of other fantastic Fifteen insider info.

Here are some of the more interesting takeaways from Randy’s generous trip down Memory Lane:

As if all that wasn’t cool enough, Randy also found some old call back sheets that were given to the actors each morning on the set and sent me JPEG copies of these instructions from September of 1990, which is beyond fucking awesome.  I’ve appended these priceless artifacts to the bottom of this post.

I’d like to extend my sincere gratitude to Randy for taking the time to send all of those great stories and for having an excellent sense of humor.

Now how aboot a reunion show?  If someone can get Ryan Reynolds on board, I’ll write the script, free of charge. 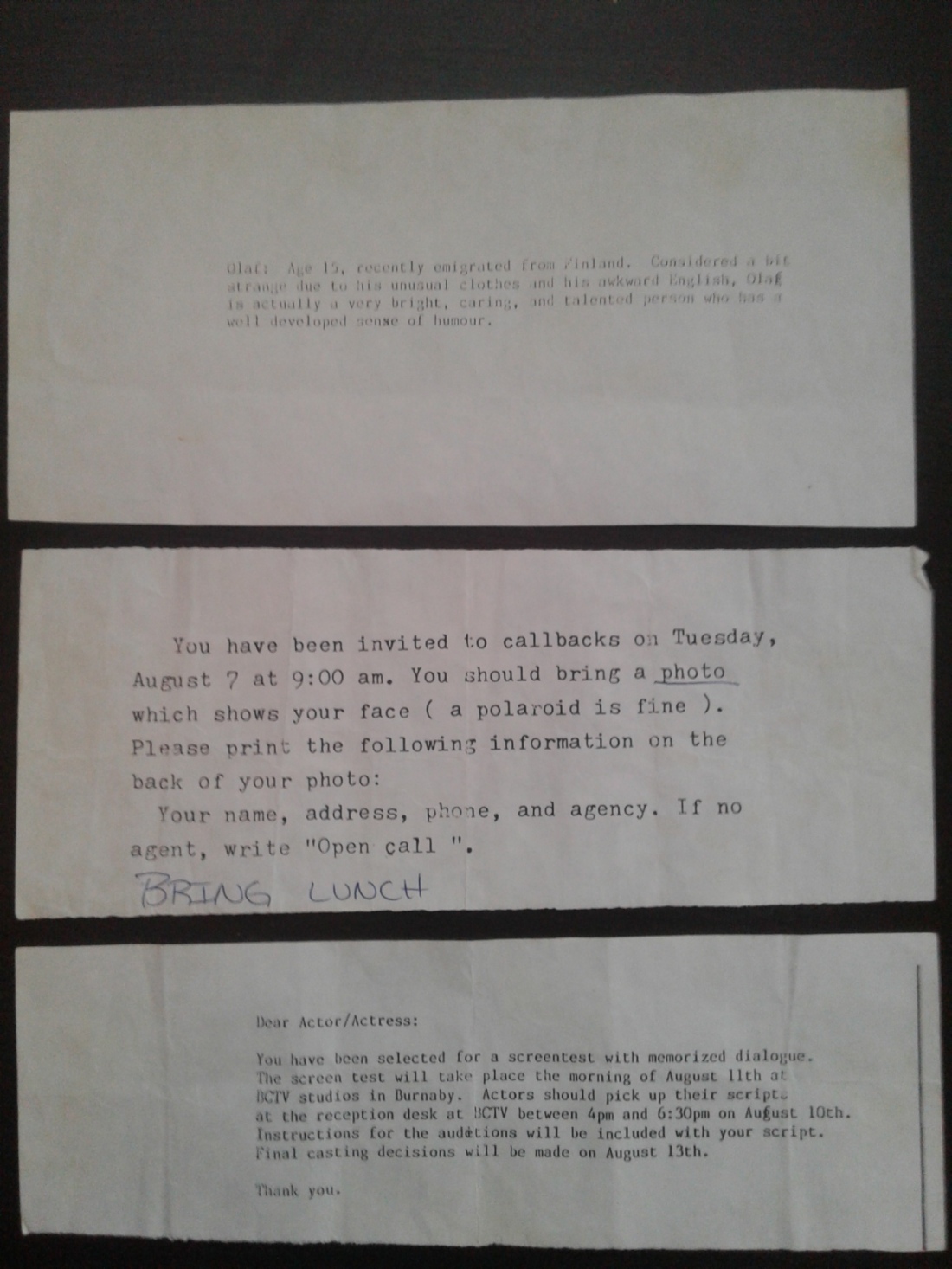 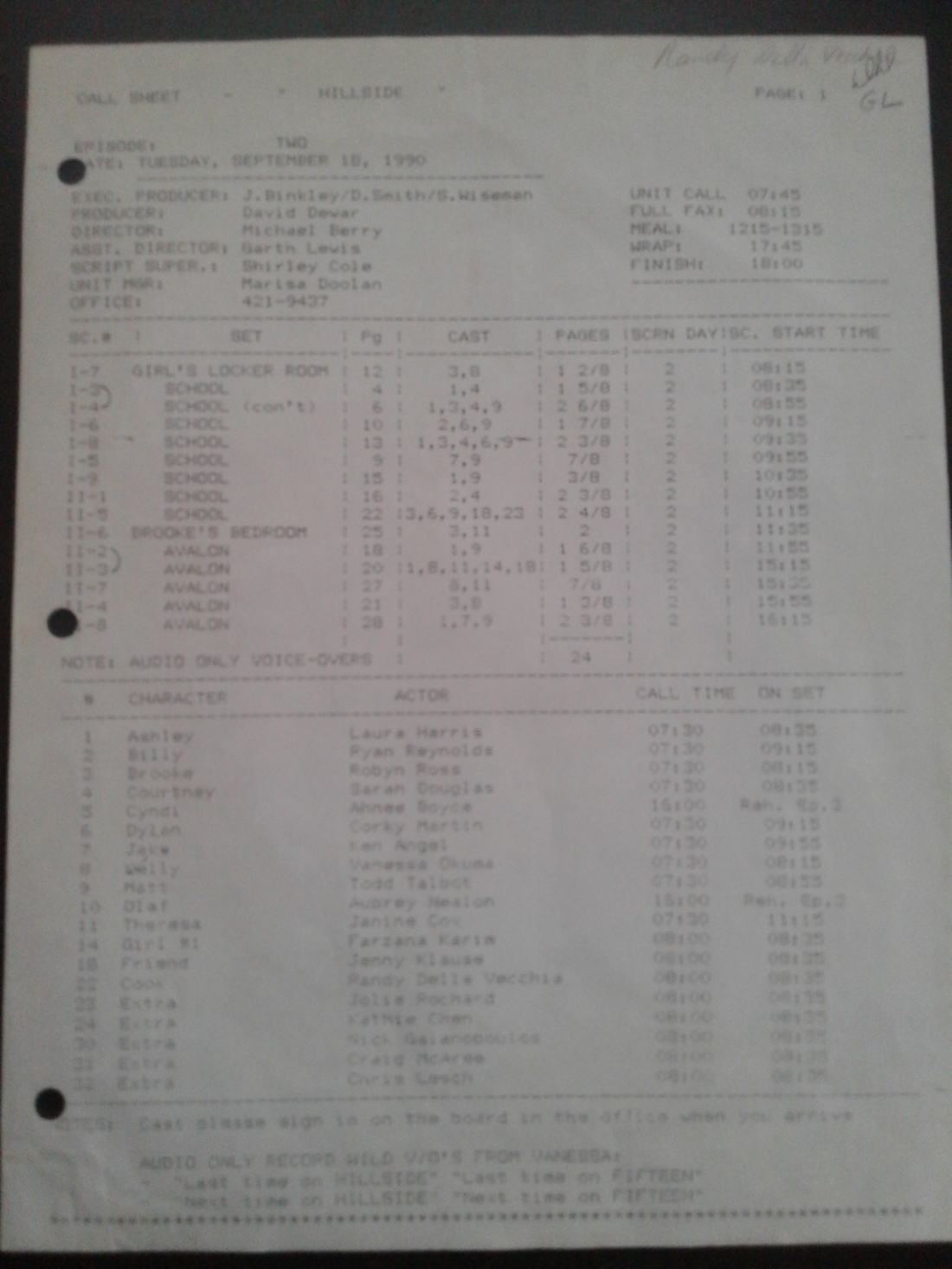 To everyone who played along with Notes From The Avalon, THANK YOU!!  You made it all worthwhile.  I’d also like to thank the cast and crew of Fifteen, as well as the entire nation of Canada for a bottomless supply of inspiration.  Although this officially marks the end of my run as a blogger, I do not intend to remove NFTA from the internet or sully its purity by utilizing it for writing aboot other topics– it is nothing less than my gift to humanity and my online legacy.

For anyone coming late to the party, below is a handy-dandy chronological guide to all of the episode posts.  Long live Fifteen!

Intermission (Go For A Soda)

Fuck You (for Jake)

Conform Or Be Cast Oot

Friends of The Avalon

An E-Mail From Deadpool